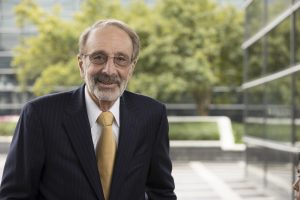 Joseph L. Basralian is the President of Winne Banta. Throughout his career, he has represented clients in all aspects of commercial real estate – including acquisition, land use planning, financing and development – and he has also represented financial institution s in all aspects of commercial lending , including over 300 economic development bond is sues. He has represented business organizations in those areas, both within New Jersey and outside the state. He represents a wide variety of business entities in all aspects of contracts, licensing agreements, mergers, and acquisitions. Having a strong background in busine ss, Mr. Basralian is well­ qualified to provide both legal and business advice to his clients.

Mr. Basralian has written numerous articles on various aspects of commercial real estate financing and leasing , and land use planning , and has lectured and participated in seminars on those topics. He is active in a number of professional organizations, including serving as a fo1mer Secretary and Trustee of the Central Board of the Armenian General Benevolent Union, the largest Armenian charity in the world. He is a Trustee of the Bergen Community College Foundation and served as its President for two years; a Trustee of the Winifred M. Pitkin Foundation, Inc.; a member of the Board of Directors of the Hackensack Meridian Realty Corporation; a member of the Board of Directors of the New Jersey Audubon Society; former

Secretary and Trustee of the Armenian Fund USA; and numerous other charitable organizations. Mr. Basralian was awarded the Ellis Island  Medal of Honor for his charitable endeavors on behalf of the community and the 2010 Medallion Award for Volunteerism and Philanthropy by the Bergen Community College Foundation. He had an AV Preeminent rating by Martindale­ Hubbell since 1979 and has been named in a list of New Jersey Super Lawyer since 2006. He was named as a “Best Lawyer” in Business, Corporate & Commercial by (201) Magazine. In 2015, he received the Bergen County Bar Foundation ‘ s Community Service Award.

He is fluent in Armenian.