In this issue: Hackensack Redevelopment: Where It’s Come From, Where It’s Going   •  Hackensack On the Rise  •  Residential Real Estate in Hackensack 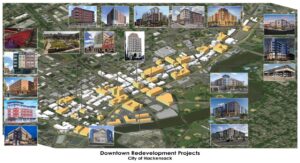 It may seem a short time ago – or it may seem like a lifetime – but it has been ten years since the Hackensack redevelopment plan was first adopted. Building Bergen spoke with Francis Reiner, Senior Urban Designer with Hasbrouck Heights-based DMR Architects, but perhaps better known as Hackensack’s redevelopment consultant, for an update on the City’s redevelopment efforts.

To anyone who hasn’t visited Hackensack in a while, the first surprise is to see Main Street as a two-way thoroughfare, which hasn’t been done since the early 1970s. Reiner says this was identified as one of the essential changes that needed to be made. He considers this change already to be a “monumental success,” one that will dramatically improve the retail and commercial environment.

On the site of the former Record building, the exterior of the first building has been completed and work is still being done on its interior. Completion is expected in  January 2022. Work has begun on a second building, with small retail shops fronting on River Street. The Hackensack Planning Board has approved the remainder of the plan for the site, including two more residential buildings and two additional stand-alone retail buildings. When it is completed – in approximately three to five years – the site will include 700 residential units and 40,000 square feet of commercial retail space.

On Lot C, across from the Icehouse, the first six-story building is 75% complete, and it is expected to be done in early 2022. The building is primarily residential and includes 3,000 square feet of retail space as well as 200 public parking spaces to accommodate the needs of the adjacent commercial uses. When it is complete, construction will commence on a second, all-residential building, with 378 total units, which is expected to be complete in 2024.

The building at 210 Main Street is complete and fully leased, and 170 Main Street, the 14-story building, dubbed “The Brick,” should have a certificate of occupancy soon. The Brick, which includes 384 units and 10,000 square feet in retail space, will start leasing shortly. A second building is scheduled to be presented to the Planning Board before the end of the year and will include a rooftop restaurant.

Developers indicate that leasing activity on opened buildings has been very strong, says Reiner. There has been a higher absorption rate than originally anticipated, which Reiner sees as a sign of strong support for the Hackensack redevelopment effort.

Among the initiatives still to come is 321 Main Street, at the corner of Berry Street. This mixed-use development has been approved by the Planning Board and is under construction. In addition, a sister building will begin construction in 2022 at the corner of Main and Passaic Streets that will mirror the Main and Ward Streets project that was completed in early 2021.

The City has sold the former Building Department, and a redevelopment project has been proposed and approved adjacent to the Anderson Street Train Station. The mixed-use building, with 225 residential units, should begin construction in 2022. This, says Reiner, shows Hackensack’s support of public transportation, as will another project near the Essex Street train station, that will begin construction in the latter half of ’22.

All of Hackensack’s new projects will add a combined 4,000 to 6,000 residential units in the downtown area and near the train stations, as well as an estimated $10 to $15 million in new tax revenue. This, says Reiner, will contribute to reestablishing downtown Hackensack as a “destination” in Northern New Jersey.

Reiner feels the 10 years have gone quickly, especially considering the skepticism with which the plans were originally greeted. He says it has been very gratifying to play a role in the City’s redevelopment, especially seeing it take shape before his eyes. He adds, “I give full credit to the mayor and council for staying the course and implementing all that has happened.”

Hackensack On the Rise 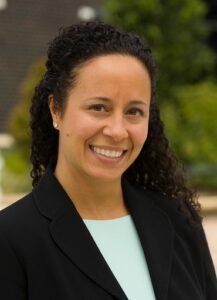 A drive along Hackensack’s Main Street tells much about the renaissance of Hackensack. Under-utilized or vacant commercial properties, and even residential properties, are being replaced with mixed use projects aggregating over 3,000 modern apartment units and thousands of square feet of retail space. Existing businesses have been given facelifts and are experiencing an uptick in activity while new businesses are entering the scene in droves.

With financial incentives offered by the City as well as the City’s premier location within Bergen County, it’s no question why Hackensack is on the rise and at such a fast pace with over 25 development projects underway. Hackensack has three designated Opportunity Zones and in many instances is offering PILOT programs and tax abatements. Hackensack has two New Jersey Transit railroad stations that run directly to the Secaucus transfer station as well as the regional New Jersey Bus Station that provides direct access throughout Bergen County and beyond and to New York City. Hackensack has access to Routes 4, 17, 46, Interstate 80, and the Garden State Parkway, and is only 8 miles from the George Washington Bridge and 13 miles from the Lincoln Tunnel. It is home to the largest medical center in New Jersey, the Bergen County offices and courts, and a university.

The pandemic increased Hackensack’s allure as Manhattanites flocked across the Hudson River feeling as though Manhattan had lost its purpose. In just a few years, 3,000 units have been constructed and are either occupied or in the planning phase, with all the buildings fronting Main Street providing retail space.

Winne Banta has been an integral player in the Hackensack redevelopment plan, with representation spanning the entire spectrum from securing site plan approvals to the acquisition of liquor licenses for the development projects. We expect the current projects to near their conclusion within three or so years and for Hackensack to inspire more residential and commercial development for years to come.

Faith Miros concentrates her practice in real estate and business law.  She has represented major commercial landlords, real estate developers and high net worth investors in the acquisition, disposition and leasing of commercial properties, including industrial, mixed-use, retail, office and multi-family.  She can be reached at fmiros@winnebanta.com or (201) 487-3800.

Everyone’s talking about what has happened to the real estate market in Bergen County over the last year. Lines at open houses, multiple offers, and bidding wars for homes are the new normal. Properties are appreciating at a higher rate than in the past.

Historically, when home purchasing is up, the rental market is down. That is not the case in Bergen County today. There is a demand for all types of residential properties. Bergen County has benefited from people moving from urban to suburban areas. There has been an influx of people looking for more open space and dwellings with home offices.

Look no further, as Hackensack, one of the most progressive cities in Bergen County, has implemented a downtown rehabilitation plan to re-develop its Main Street and re-establish itself as a regional destination. Bergen County is one of the most affluent counties in the state and Hackensack is the epicenter of the county. It has universities, a world-renowned hospital, the county courthouse, and several transportation choices.

It is estimated there will be approximately 6,000 residential rental units that will be built. With the statewide average experiencing accelerated rental rates and vacancy rents below 6%, builders can’t keep up. The consumer wants new products with lots of amenities. The future is bright for Bergen County and Hackensack.

Robert Abbott is Broker/Owner with Berkshire Hathaway Home Services Abbott Realtors. He can be reached at bhhsabbott@gmail.com or (201) 891-2223.

Want to join the discussion?
Feel free to contribute!

Remote Notarization is Here to Stay
Scroll to top